Well, it’s the end of the year, so I thought I’d have a quick look back on the start of what I hope will be a writing career. And of course, a look toward the future and what’s to come. 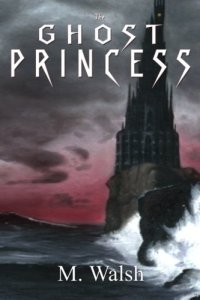 First and foremost…this year I published my first novel, The Ghost Princess.
Although it took me about a year and a half to get it done, from first draft to published, I’d been working on these characters and trying to get published for quite a while. So it is gratifying to have finally accomplished this.

And I’m pleased to say it’s gotten some pretty good reviews so far from Hungry Monster Book Reviews, Unlimited Book Reviews, and Kirkus Reviews. I also got some decent scores and a nice write-up from the judges of Writer’s Digest Self-Published Books Awards.

And speaking of Kirkus, I am very happy to say The Ghost Princess has been named to their Best Books of 2015.

I owe a thanks to friends and family who’ve supported my work. And a particular thanks to Anthony Jensen for painting The Ghost Princess‘s cover.
And of course a thanks to those who bought and enjoyed my strange little fantasy story of misfits. The most recurring feedback I’ve gotten has been on my characters, and I’m happy to see most of it has been positive.

All in all, not a bad start.

In other news, earlier this month I finished the first draft for my next novel, which will be a sequel to The Ghost Princess. I don’t want to commit to a specific release date, but I’m hoping I can get this done before the end of 2016.
As I mentioned in my interview with Hungry Monster Book Reviews, we’ll see the continuing (mis)adventures of Katrina Lamont, Krutch Leeroy, and Lily Blackthorn—along with some new characters.

Krutch will find himself in a large city called Seba—a practical wasps’ nest of corruption and worse. Despite his efforts to go unnoticed, being as he’s “The” Krutch Leeroy, he’s going to find himself caught up in the backstabbing schemes of Seba’s various factions. Hilarity will ensue.
Lily, meanwhile, thinks she can handle living among normal people and try to leave Graylands for the more civilized parts of the world. I think any more than that would be spoiling—suffice to say, her journey will not be easy.
And finally Katrina, who’s getting worse. She’ll seek out the remains of her people, desperately hoping they’ll accept her. Along the way, we’ll learn more about her past and lost loves, and she’ll cross paths with a certain scar-faced sociopath who takes an interest in her.

A big theme in this book will be these characters’ search for companionship and a place to belong. In Seba, Krutch Leeroy probably should live like a king—if he actually was anything like his infamous reputation made him out to be. In trying to leave Graylands, Lily is taking the chance she can live and function among normal people—despite what she is. And Katrina is trying to find someone to save her from herself.

As I continue working on it, I’ll keep this site updated on its progress and post some excerpts here and there. If all goes well, hopefully by this time next year, the next volume in the Graylands saga—tentatively titled The Jinxed Pirate—will be up for sale.

In the meantime, I’ve also been working on some short stories I hope to get published in the near future. Some might wind up getting posted on this site.

I also would like to—if I find the time—write some supplementary material for Graylands to post here.
Information about Graylands and its world’s history, the different races that exist there, maybe some commentary on specific characters, and other stuff that will flesh out the world and its cast that wouldn’t necessarily make it into the actual books.

Again, I’d like to say thanks to those who’ve been supporting me and bought The Ghost Princess. I hope you enjoyed it and will continue to follow my career.
So…onward and hopefully upward as we head into 2016.