Here’s a brief snippet from one of the stories featured in Ones & Zeroes,
“The Mouse & the Dragon”

The knight charged forth, shield up and spear ready. His armor glistened despite the dreary overcast sky like a chrome beacon amidst his hellish surroundings. The horse’s neigh was loud and triumphant as the clopping of its hooves echoed on the scorched cobblestone. The knight’s banner, an orange lion against a black background, billowed in the wind.

He would’ve been a majestic sight to behold had Hildy not seen it already or known what was coming.

The knight crossed the stone bridge and charged into the castle’s courtyard where the dragon awaited. Their confrontation was brief and it ended like all the others. The knight did better than most and actually got within striking distance, but with a swipe of its tail, the dragon swatted the horse and sliced the poor animal in half.

Its rider flew through the air and landed with a metallic clang like the sound of dropped pots and pans. The dragon paused, allowing him to regain his bearings, with no evident fear of its latest enemy. It waited for the knight to get to his feet—whether out of curiosity, boredom or sadism, Hildy couldn’t guess.

Alas, the knight froze upon seeing the great beast before him. Although his face couldn’t be seen due to his helmet, his body language suggested his courage had been cut in half like his steed.

A muffled scream echoed through the courtyard as the knight was snatched in the dragon’s jaws. The sound of crumpling metal, crunching bones and desperate howling could be heard even from the tower as it chewed on its prey. When it was satisfied, the dragon spat him out in a ball of fire.

Whatever was left of the knight hit the ground with an explosion, and Hildy winced at the sight. No matter how many times she’d seen it, she could never get used to such brutality. Before turning from the window, she saw the fallen knight’s tattered banner drift across the ground like autumn leaves and lamented yet another brave life lost for nothing.

She sighed and scratched another mark on the wall. That was thirty-one. Thirty-one would-be heroes had come and died trying to slay the dragon. And thirty-one times she hoped against hope someone would succeed and free her.

But after three thousand, two hundred and ninety-seven days, Hildy was done waiting.

If you’re interested in reading the rest of
“The Mouse & the Dragon,”
along with 13 other short stories like
“The New Babysitter” and “Look the Other Way“
check out Ones & Zeroes: A Short Story Collection 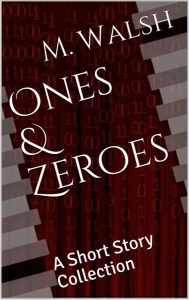 Only 99¢ on Kindle
Free on Kindle Unlimited
and $7.99 in paperback